We have a problem.

And it’s a problem a lot of SaaS apps face, especially plucky little bootstrapped self-serve apps like us.

(Read: none of our parents know anyone in VC but WE’RE NOT BITTER)

And that is:  our minimum price tier is $59/mo.  For our target market, this is affordable but absolutely not an impulse buy.  It’s something they’re going to want to think about, explore the options, come back a few times.  Convertri isn’t an expense you enter into lightly.

And that means it’s a right fucker to sell via paid ads, especially when, like Team Propaganda at Convertri, you don’t really have any experience in paid traffic to draw on.

In terms of developing the skill set, this is far less getting our feet wet and more cannonballing from the speedboat right next to the ‘Danger: Sharks’ sign.

Despite this, it’s not going that bad.

We’ve managed to set up events to attribute sales reliably to ads, rather than the original pixel approach which was telling us we’d made 64 sales in a week that only produced 20 new accounts.  We’re not reliably turning a profit on ads yet but we’ve got more than enough word-of-mouth sales to make up the gap.

But doing this – and the frustrations of trying to optimise over a multi-touch process – does mean our heads start to get turned in other ways.  In the international language of overly-used memes, it’s kinda like this: 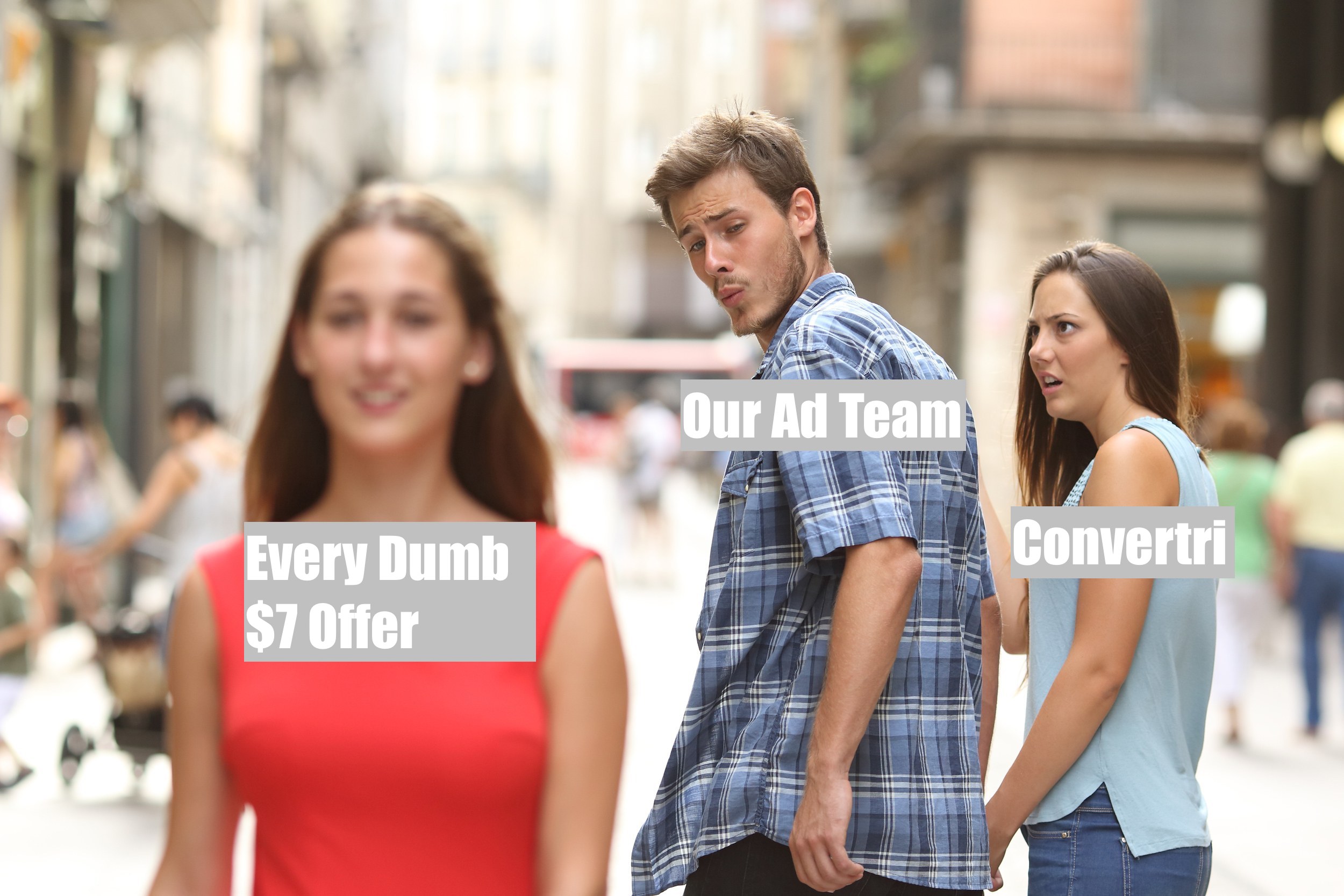 So we’ve been wondering if we could construct an offer that was just easier to sell and scale via paid ads.

Our main offer has the following hurdles:

So we started thinking: could we build a funnel designed for this ad method?  A simpler offer.  Something we could sell for a one-time price and scale?  An offer that is just easier to turn profitable?

Our first impulse – because we’re us, and we never do anything simple when a complicated option looks so much fun – was to build a fresh funnel.  A new product, a new offer.  Let’s build us some training wheels.

But we managed to restrain ourselves.  That might be the road we end up taking, but we should at least try to make it work with the assets we’ve got.

So we put together a new Convertri offer.  Our initial plan was to offer a one-time 12-month licence of Convertri Standard for $297 – something which we’ve used to great effect in affiliate-driven offers in the past.  But that proved a pain in the arse with the cart system we use, so we went for $297/yr instead.  Still a subscription, but on a 3-day discount timer we did at least have some strong urgency to use.

We set up a sales page – a slightly adapted version of the one used for the 12-month $297 offer.

That conversion isn’t even an actual conversion, it’s just someone clicking through to the sign-up page that’s the first step of our checkout process.

The video ads can basically be discounted.  One wasn’t approved (and we still don’t know why, it was the same landing page as the other 5 and every component of that copy was used in other ads in the set, so… THANKS FACEBOOK) and the other was brutalised by Facebook’s optimisation algorithm.

Combining the results to get a more clear picture of how each component was performing overall, we get:

This gives clear winners in both categories, and crucially these winners outperformed consistently.  It wasn’t one magic combination pulling otherwise average results up.

This all suggests to me that while we clearly have a problem, it’s not an ad problem.  The ‘speed/pretty’ combo got us a CPC of $0.87, and with a $297 offer that means we only need a conversion rate of 0.29% to break even, and that’s discounting any follow-on sales.  A conversion rate of 1% means we’re coining it.

And those rates should be achievable – we’ll need good audience targeting to hit anywhere near 1% but beating 0.29% should be doable.

But probably not with the current page.  It worked great for an affiliate audience, but we’ll need something different for paid ads.

This is a bit of a pain, since the landing page is by far the biggest job to change.  Given it’s trying to sell a $297 offer in one hit, it’s pretty big.

So we’ll do that, but probably not right away.

My next steps with this offer will be to try it on warmer audiences – for instance, the retargeting list built from people who have already visited our website.

This won’t be as scalable so even if it’s successful won’t be viable as a long term campaign, but it’ll give us some data on whether the page can work with warmer paid audiences.

And that’s as good a next step as any.